THE CREATION OF MAN 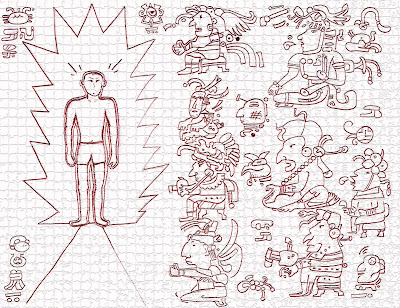 Tepeu & Gucumatz, the Mayan gods of Creation. The Fabricators, the Ancestors, the Wisest.
Tepeu, Lord of the Sky. Gucumatz, Master of the Storms, also known as Kukulcan.
One day, they had a meeting at the woods. After a long conversation, they decided to create a new species in order to preserve their heritage.
Both of them, decided to work as a team and supervise the process of creation ( they would also be backstage the day of the show).
With no hesitation, they started to work very hard, using their power and amazing imagination.
Despite their tailoring and outstanding master skills, the first attempt turned out to be a failure.
So they decided to summon other gods and created a powerful staff; Alom, Tzacol(amazing stylist of the wood) and many others.
They worked together and from wood, they created a man but they felt something was wrong.
Tepeu & Gucumatz were worried, they knew that the new creation lacked of something, a feeling, a mood, a substance... It had sensuality and beauty for sure but still there was something missing.
Immediately, they had an idea. They decided to use other materials and fabrics; silk, cotton, clouds, sun and more; with these ingredients they would create a different kind of man.
That night, they found corn and decided to hire new staff to help them in their new project.Very powerful, skillful, talented staff. They were 13 new members in total: Ixmucane, Ajbit, Ajtzak, Aloma, Bitol, Hunahpu-Gutch, Bitol, Alom, Qaholom and others whose names are in the language of wisdom and beauty.
They worked together for long days and long nights, but it was not until the third attempt they finally made it.
As promised ,the day of the show arrived, it was the summer solstice. Tepeu & Gucumatz were backstage at the temple of Kukulcan, amazing pyramid that provided them the opportunity to express the magnificence of their new creation. Warriors, Mayan ball game players, birds and creatures with impressive power beyond imagination were invited to see the show.
The front row was formed by the Lords of Xibalba, the critics, very powerful and influential figures that came from faraway and forbidden lands not suitable for gods with fear of danger, all nicely dressed wearing green jade masks.
At the end of the show, a member of the press of the underworld asked Hun- Camé, the most exigent and influential between the Lords of Xibalba, about his opinion on the show he attended. Taking off his sparkling green jade mask, he replied:" Tepeu & Gucumatz have succeeded. They have created a new man, beautiful, smart, unique but the most important...... a man with a soul ! , We are looking forward to seeing him next season".
Written by Ivan Guerrero, based on the Popol Vuh, the Mayan bible on the creation of man. Mexico 2004. All rights reserved.
Original drawings by Ivan Guerrero 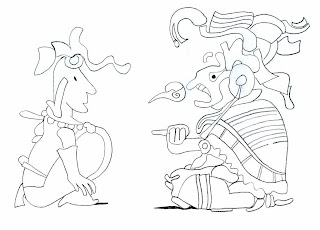 THE DECISION
After a long conversation, Tepeu & Gucumatz decided to create a new species in order to preserve their heritage... 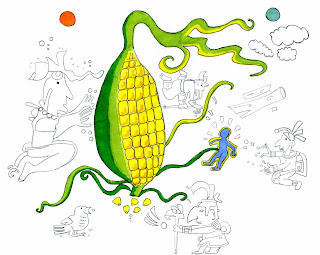 THE FEAT
Long days and long nights of hard work with the help of their new magical and powerful staff and materials such like corn, clouds, silk and many more miraculous ingredients... 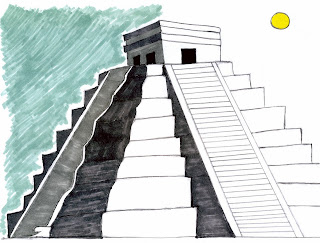 THE SHOW
The wait is over. For the day of the summer solstice ,the impressive pyramid of Kukulcan became the perfect stage for the presentation of the new creation... 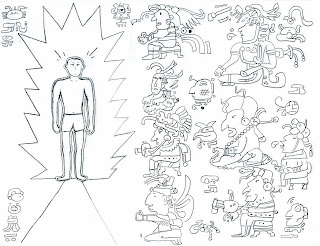 THE GUESTS
Creatures beyond imagination were invited to see the show.
At the front row, The Lords of Xibalba contemplate the new creation... 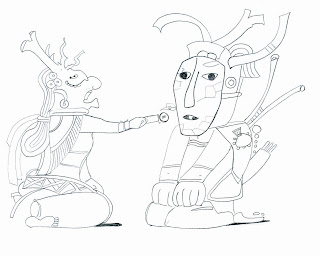 THE VERDICT
" Tepeu & Gucumatz have succeeded. They have created a new man, beautiful, smart, unique but the most important...... a man with a soul ! " , Hun-Camé, the most influential among the Lords of Xibalba said when he was asked about his impressions on the new creation...
Email ThisBlogThis!Share to TwitterShare to FacebookShare to Pinterest
Published by Ivan Guerrero at 9:40 PM

Labels: MAYAN, THE CREATION, THE STORYTELLER