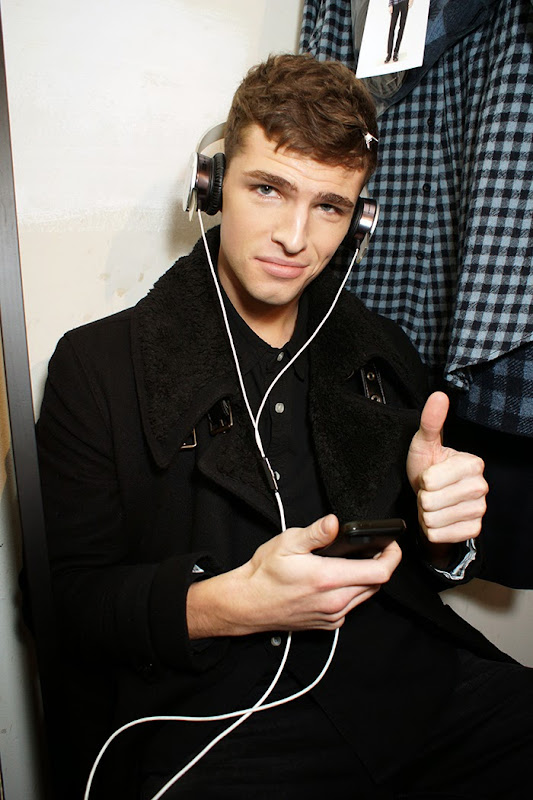 Awaiting the upcoming Spring/Summer 2015 menswear fashion weeks, I have created this special post in review of my latest trip to Europe for the Fall/Winter 2014-15 season.
A collection of photographs and special stories I shot during my traditional backstage inspections in Milan, Paris and Florence, that you don't want to miss since I have now updated with runway videos and some of them with extra pics for your viewing pleasure!
Special events, fashion trade show Pitti Uomo and backstage coverage review were usually the main core of my photography work during that visit, always looking forward to sharing with you things the way I saw them.
As a photographer I find really interesting the way every new season new experiences and challenges pop up when it comes to technique and skills.  Sometimes more than just a photographer, you need to become a sort of ' image psychologist ', a 'special invisible collaborator' who needs to get involved with the ambiance of a fashion show and its staff without being noticed (in the case of backstage specially) but also staying present when there is an opportunity for an interesting shot. Both active and quiet, fast and slow at the same time, holding a camera and pressing a shutter will definitely won't do the work, you need patience, a big sense of conviction and a relentless passion. Have a look and enjoy.
Street style photographer Karl Edwin Guerre working outside the Fortezza da Basso during Pitti Uomo 85 in Florence. More HERE. 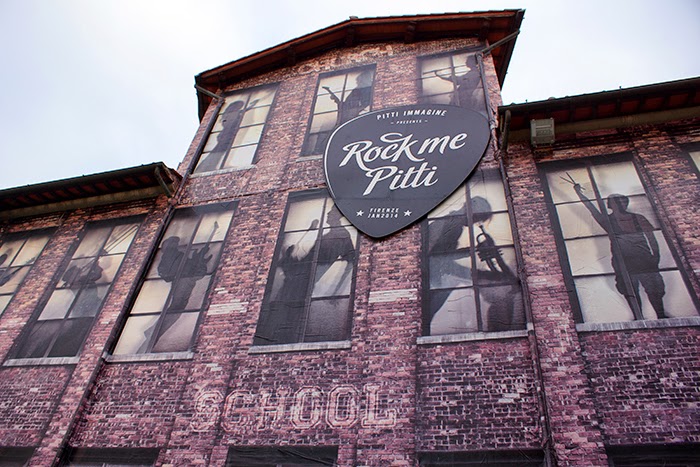 'Rock me Pitti' was the fair's layout for the 85th edition of Pitti Uomo. Bringing fashion and music (as well other ideas and disciplines) together has been one of the most recurrent elements and core themes which have inspired the tradeshows conceptual lines during past seasons. 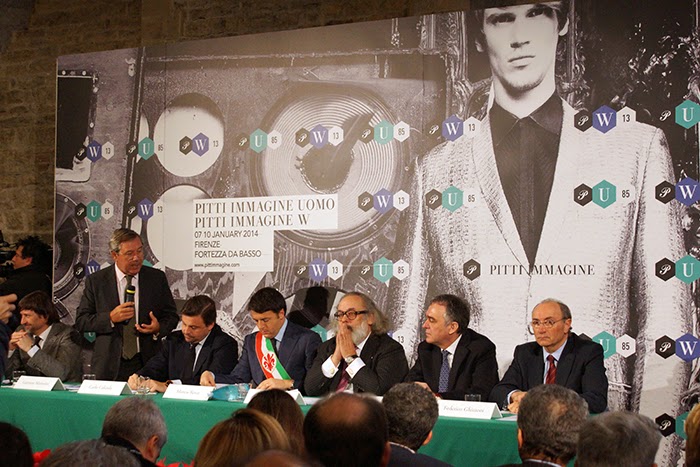 The opening ceremony of Pitti Uomo 85 held at Palazzo Vecchio, the president Gaetano Marzotto and relevant authorities of Florence presented a preview of the upcoming special project to be held for the celebration of the 60th anniversary of the activities of 'Centro di Firenze per la Moda Italiana' in coincidence with the 86th edition of Pitti Uomo. The program entitled 'Firenze Hometown of Fashion' will feature a series of special events showcasing born-in-Florence fashion brands such as Gucci, Salvatore Ferragamo, Emilio Pucci and Ermanno Scervino plus various cultural and Italian fashion related highlights in store for the occasion. 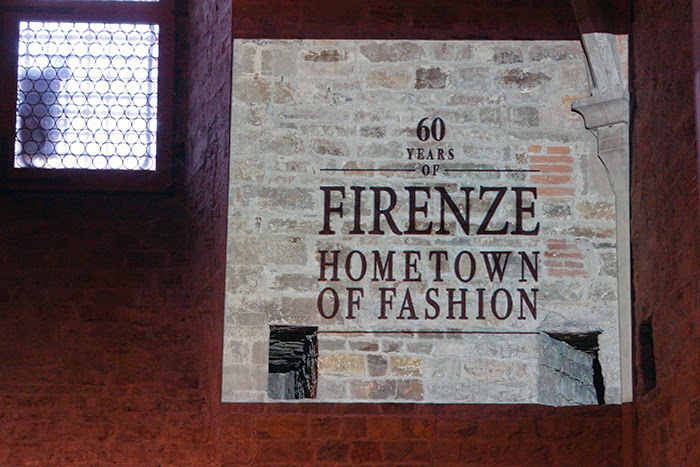 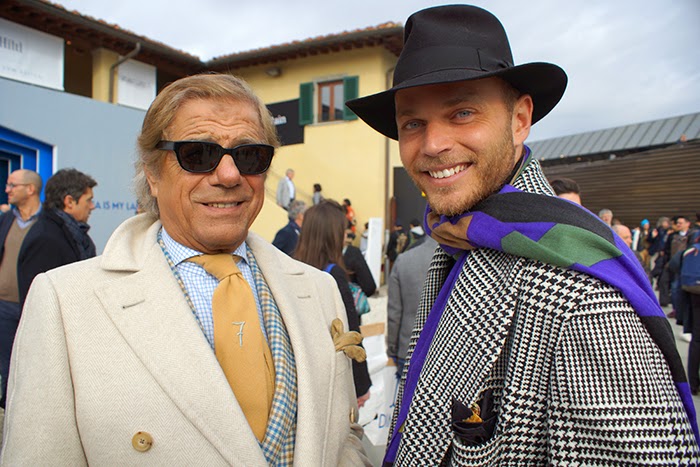 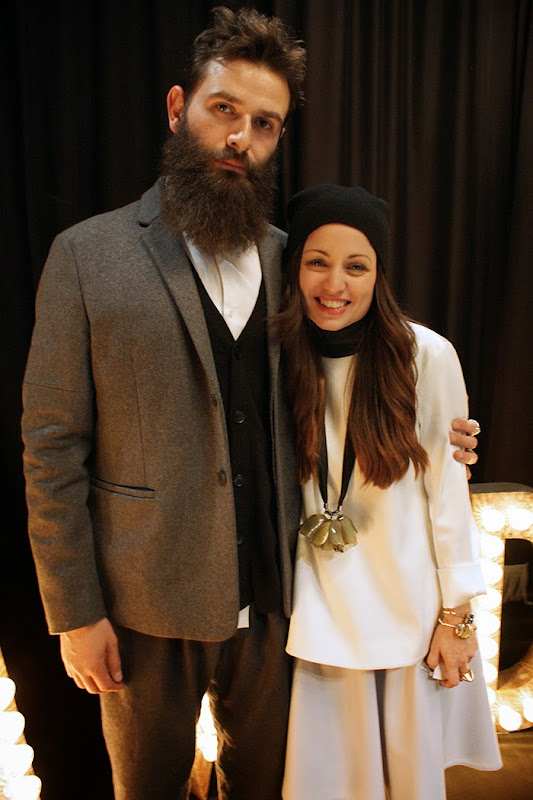 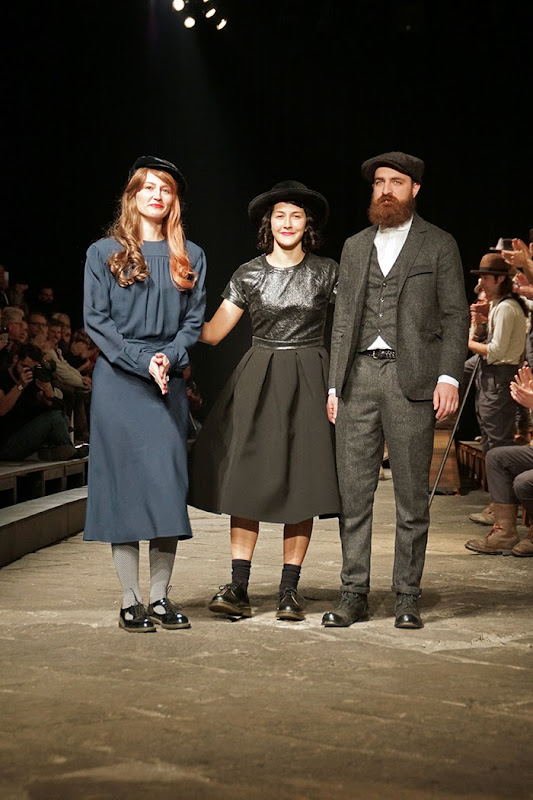 Matteo Gioli, Veronica & Ilaria Cornacchini creators of SuperDuper Hats, presented their men's handmade hats collection for the Fall/Winter 2014-15 season during a special performance entitled 'Gandy Dancer' held at Pitti Uomo 85. Both labels SuperDuper Hats & Casamadre were winners at the 2013 edition of Who Is On Next Uomo? contest. More HERE.
The presentation of the Denim Selvedge and RAW Denim Autumn/Winter 2014 Collections from G-Star RAW at the Teatrino Lorenese at Pitti Uomo 85.
This Autumn/Winter 2014 season marks the 10th anniversary of the collaboration of the label with acclaimed industrial designer Marc Newson, presenting for this occasion a special premium collection of T-shirts and sweatshirts featuring innovative selvedge finishes ['selvedge denim' means that the edges are nicely bound (hence “self-edge”), diminishing the likelihood of the ends/edges unraveling.] More HERE. 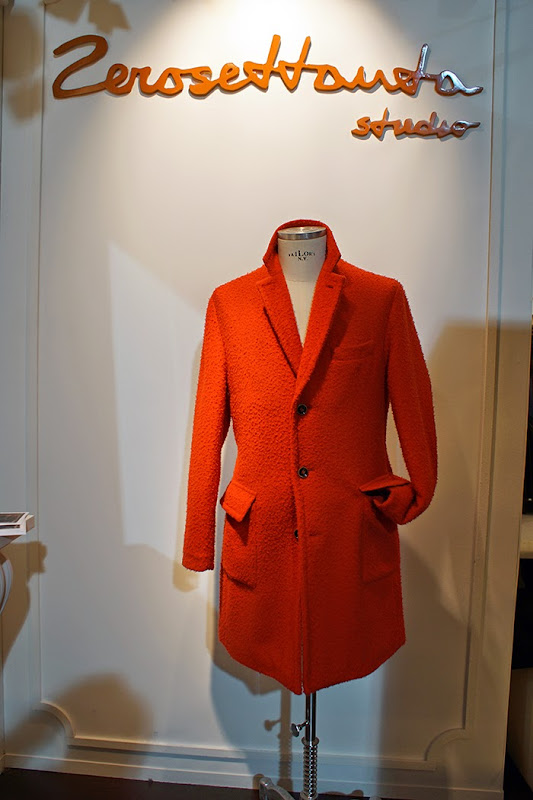 Preview of the upcoming Autumn/Winter 2014-15 Collection from Zerosettanta Studio. 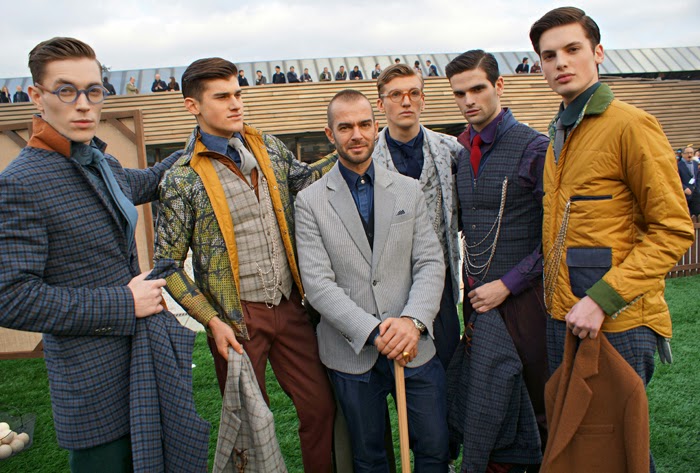 Turkish-born, London based designer Serdar Uzuntas Autumn/Winter 2014 Collection preview presented through Alternative Set, a series of special performance programs held at Pitti Uomo 85. More HERE.
Diesel Black Gold as the guest designer of Pitti Uomo 85 presented its Fall/Winter 2014 Collection under the creative direction of Andreas Melbostad with a special fashion show staged at Stazione Leopolda. In case you missed it, check out my backstage photography coverage in exclusive for Fucking Young!, HERE.


The launch of Alessandro Dell'Acqua's men's collection N°21 as a special project/ event organized by the Fondazione Pitti Discovery. The event marks Dell'Acqua's comeback in Florence (he actually showed his first eponymous collection in Pitti back in 1998), staging a presentation at the Biblioteca Nazionale Centrale di Firenze. More HERE. 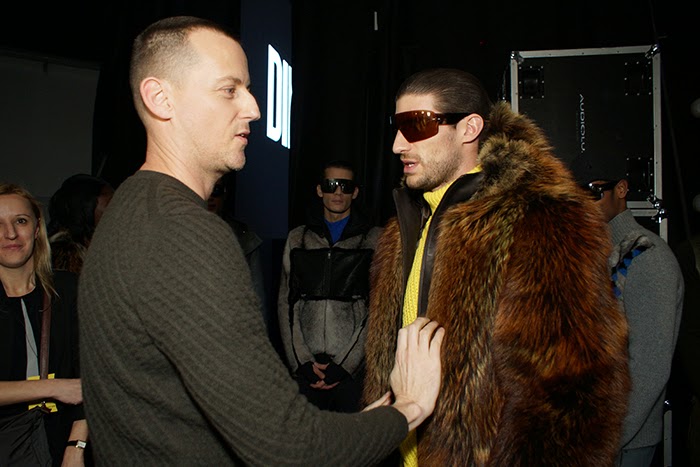 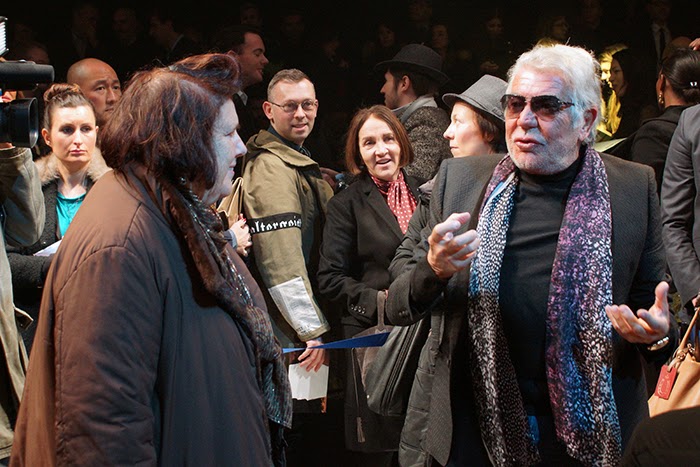 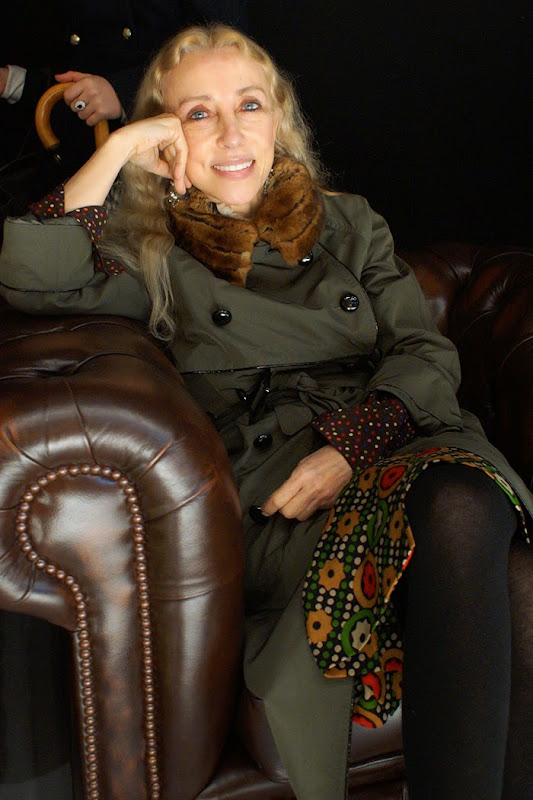 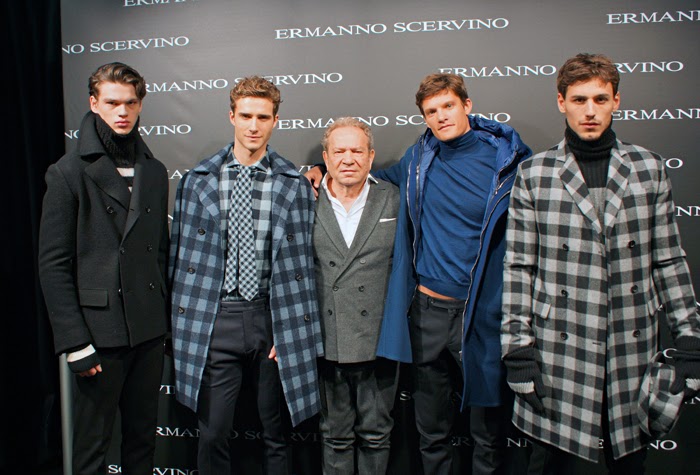 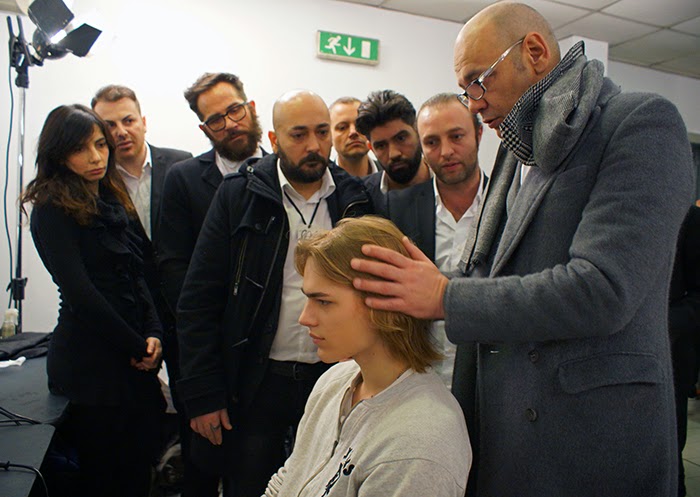 Ermanno Scervino Fall/Winter 2014-15 Backstage: A main hairstylist explains in front of the other professionals the work to be done for the show.
Belgian designer Walter Van Beirendonck (above) preps the models before his Fall/Winter 2014-15 show in Paris. More HERE.

The exit to the show moments before Cédric Jacquemyn Fall/Winter 2014-15 show. More HERE.

South Korean designer Songzio, backstage with the model lineup before his Fall/Winter 2014-15 show. More HERE.
Email ThisBlogThis!Share to TwitterShare to FacebookShare to Pinterest
Published by Ivan Guerrero at 12:15 PM